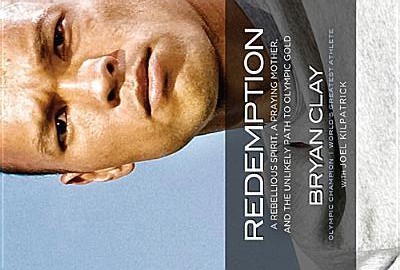 Redemption: A Rebellious Spirit, a Praying Mother, and the Unlikely Path to Olympic Gold by Bryan Clay

Who besides Bryan’s prayer warrior mother dared to dream and trust God that he would turn from living as a drinking, fighting, selfish and self-destructive, insecure-but-arrogant young man?

Redemption, Bryan Clay’s autobiography (written with Joel Kilpatrick) is the story of a boy becoming a man; one of society’s throwaways becoming a world-class athlete, husband, father and follower of Jesus. Bryan invites you into his journey to the time just before he plans to attempt something no one has ever accomplished – winning a medal in the Decathlon – in three successive Olympics! He earned the Silver in 2004, the Gold in 2008, the [. . .choose your medal . . .] in 2012?

One of the things I really enjoyed about Bryan’s story is how much impact the coaches and administrators at Azusa Pacific University had on his life. Terry Franson, one of Bryan’s mentors at APU has had a hand in shaping and molding an incredible number of young men. Mike Barnett, also of APU and another of Bryan’s coaches was himself an Olympian in the javelin throw at the Barcelona 1992 Summer Olympics. Barnett constantly counseled Bryan that real life is bigger than sports, a truth that Mike’s brother Doug (APU alum and former NFL player with the Rams, Redskins and Falcons) reminded my own son.

At least one Biblical truth resident throughout the story is that God is faithful – even when and if we are not. Bryan always gives credit to the Lord for his success and seems to long for opportunities to use his position and influence as one of the world’s finest athletes to remind others that he was nothing more than an ordinary young man who allowed God to shape him.
I wish there had been a bit more “story” and more “showing rather than telling” of meets and training schedules and victories and defeats. I still I give the book a rating of 4 out of 5, and recommend it as another instance of God living His life wonderfully and successfully through a broken vessel that He has marvelously healed and repaired. Go Bryan in 2012!

View all my reviews